Tera Nova National Park of Canada  looks and feels very similar to Acadia National Park at Maine, but not as beautiful. The main reason we visited Tera Nova was for kayaking with whales and close up look of iceberg. It did  not disappoint.

We had a guided sea kayaking with the Inn at Happy Adventure near Happy Adventure (a town) - they have an office at the Tera Nova National Park visitor's center. The tour started late in the afternoon of the second day we were there when the sea was calmer at Bonavista Bay.

It was cloudy and cold. We put on jackets, gloves - we are prepared for the weather -  and took a quick instruction from our guide Chris, and we were on the water in a short time.  Lily and Nicholas on one tandem, a pair of ladies on another tandem and I paddled with Chris.
There was light wind, and the water was calm. We paddled along the shoreline to the Dungeon, a sea cave by the shoreline.

The shoreline is rocky and picturesque; the water is clear and looks green when closer to the shore.
Chris and I were quickly pulled ahead and we paused for the other two kayaks to catch up. We chat a bit  - Chris was a college student majoring in neuroscience at a University at St. John's, he has been a tour a guide with the Inn for 4 years - since he graduated fro high school; I told him about our kayaking experience.

In addition to the beautiful coastline, there were 3 highlights during this tour.
While Chris and I were in the front of pack, I spotted a orange color big "cat" - a red fox - on the shore. No one else really saw it!! But it was confirmed by the captain of a passing boat.


The second highlight was paddling into the dungeon - which has a water fall at its entrance. It was quite some excitement to the group for paddling pass the water curtain and turn around in the dungeon. Chris and I paddled in first and parked the kayak in the dungeon on one side. It was very dark inside and I could see the inside only when taking pictures with flash light. With flash lights, it was revealed a very rugged sea cave - and the rocks are colorful - black and pink.

Lily and Nicholas paddled in and and it took them some efforts to turn around in the dungeon and paddled out. Similarly to the other group.

As we were on the return trip, I spotted a whale in the middle of the bay and Chris affirmed us that it was a Minky whale. We paddled toward the center of the bay and hoping to see it coming back up. But it swam back to sea.

We stayed on the land the day after kayaking and went on the boat tour in two days. We, along with our guide Harvey and 6 other tourists, rode a motor boat speeding into the ocean in a gorgeous, sunny day. Blue sky, scattered white clouds made everything so much more beautiful, rocky hills and peninsulas on the shore, beautiful islands in the bay. The first treat of the tour was to see bald eagles and their newly born eaglets - only see one bald eagle perched in the nest high on top of a tree by the shore, papa eagle went for food hunting and the eaglets were block from the view.

To tell the truth, I was really disappointed the first time we spotted icebergs from afar - they looked so tiny, not the magnificent mass I imagined.  But what can look large in the vast ocean?

When we got close to icebergs, we encountered 4 of them, by the boat, we were excited and in awe. The icebergs are all pretty large at least a few times the size of the motor boat we were in, the largest one must be at least two story tall. Remember that we only saw the tip of the icebergs, 90% of the mass were under water!

Depending on the viewpoint angles, the iceberg can look femininely elegant or masculine imposing.

Bald eagles, icebergs, an island with tens of thousands of puffins,  arches in the sea, quiet and beautiful coves by the bay - wonders of nature - They made a marvelous day for me!

Time is precious, but you can not save it, spend wisely

Photo of the week 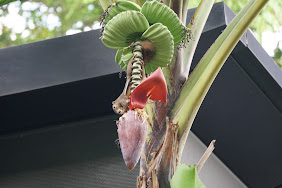 Banana flower and a squirrel